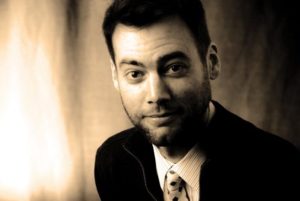 Lance got interested in Storytelling the way that he imagines most people do: through automotive engineering and particle physics.

Growing up in rural Illinois, Lance always had an interest in science and engineering (not to mention his dad’s stories about growing up with fast cars). He attended the Illinois Mathematics and Science Academy, where he did an internship at Fermilab, and also started acting and directing theater. While attending IMSA, Lance was diagnosed with Crohn’s Disease.

As it turns out, stories are a lot like cars. They can be broken down into their component pieces. Each part can be analyzed and improved. When the improved parts are reconnected, the whole functions even better.

After moving back to Illinois, he began working with entrepreneurs and professionals to use storytelling techniques in marketing and business communications.

In 2011, Lance suffered an intestinal perforation due to Crohn’s, and nearly died due to complications from contracting VRE. Only then did someone mention, “Lance, have you ever talked to doctors about Storytelling?”

To his great delight, Lance is not the first person to think of this. Today, Lance spends most of his time investigating how storytelling technique and structure can help patients and doctors improve health outcomes.